Later Jesus appeared to the eleven disciples, as they sat at the table; and He rebuked their unbelief and hardness of heart, because they did not believe those who had seen Him after He had risen. And Jesus said to them, Go into all the world and preach the gospel to every creation. Whoever believes and is baptised will be saved, but whoever does not believe will be condemned. Therefore go and make disciples of all nations, baptizing them in the name of the Father and of the Son and of the Holy Spirit. 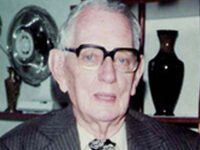 Living Waters Gospel Broadcasts (LWGB) was started in 1953, a dream and vision cherished by late Bro. Harold Mc Gregor . This dream became a reality when this broadcast started through Radio Ceylon, with no money, but only hope and trust in the Lord Jesus Christ.

LWGB continues it work, under the guidance of its chairman Mr. B. M. Nimbargi , an active member of LWGB right from its early days. It is also managed by a group of dedicated Trustees, who together have carried on the Lord’s work over the last 68 years. Living Waters Gospel Broadcasts is involved in a variety of activities to spread the good news to the unreached through TV gospel transmission, Radio gospel broadcasts and Emmaus Bible Study literature.

In one God, the creator of man and all things, eternally existing in three Persons in a threefold relationship that of Father, Son, and Holy Spirit. That Jesus Christ was begotten by the Holy Spirit, born of the Virgin Mary, and is God incarnate, the God-Man. That man was created in the image of God; that he sinned and thereby incurred not only physical death but also spiritual death, which is separation from God; that Adam’s sin is imputed to the whole race of mankind; that all human beings are born with a sinful nature; and that when they reach the state of moral responsibility becomes sinners before God in thought, word, and deed. The Lord Jesus Christ died for our sins according to the Scriptures as a substitutionary sacrifice, and that all who believe in Him are freely justified before God and stand before Him accepted in the character and merit of Jesus Christ.

In the bodily resurrection of Jesus Christ, in His ascension into heaven, and that in His present glorified body He is the Head of the Church, the Lord of the individual believer, the High Priest over the house of God, and the Advocate in the family of God. In the personal, imminent, pretribulational, and premillennial second coming of the Christ; first to receive His own to Himself, and later to set up His earthly kingdom and to reign over redeemed Israel and all nations; that is, to bring peace and blessing into the whole world. All who by faith receive the Lord Jesus Christ as Saviour are born again of the Holy Spirit and Word of God, receive the Holy Spirit and a new nature, and also are baptized by the Holy Spirit into the body of Christ. All who are born again should receive water baptism by immersion in the name of the Father and of the Son and of the Holy Spirit and Worship the Lord in Spirit and in Truth. In the bodily resurrection of the just and the unjust; the everlasting blessedness of the saved and the everlasting punishment of the unsaved.

One evening in November 1952, Doris and I were in the Bandra bookshop, hoping for some customers, when a well dressed, Goan Roman Catholic walked in. “Good evening” he said, “I am salesman in Bombay for Radio Ceylon and Radio Goa. They are Government owned commercial Stations. The Seventh Day Adventists are broadcasting regularly. I am wondering whether you might be interested’.

His words challenged me. I knew nothing about tape-recorders, which were beginning to take over from wire recorder. Neither did I know anything about preparing Radio programs. Nevertheless I replied. “Yes, I would be interested, but we would need some time to think it over. Can you call again in a few weeks time?” During the next few weeks, we prayed earnestly and discussed this matter many times.

The cost of commercial radio seemed prohibitive, but when the numbers being reached was taken into consideration, then per capita it is by far the cheapest form of evangelism. So when Mr. Santos, the radio rep. returned, we able to tell him that we would like some time. Radio Ceylon was a tremendously popular station as it largely broadcasted Indian film music. It was said that 95% of all radio listeners in India listened to it. A problem arose in that there was a half hour time slot for religious programs every evening at 9.30 p.m. but there was no time left. If we bought time it would have to be in the morning at 9.30 a.m. I that case we would be required to broadcast five mornings a week. The cost seemed impossible. On the other hand, we could broadcast in English and four India languages.

So in faith we sighed a contract for a year for the five programs. I remember waking in the middle of the night and laughing at myself. What would the Buddhist Government think if it knew that we had signed a contract with no money in the Bank and only the Promises of God for security? Now nearly 40 years later we can testify, “There hath not failed one good thing of all the Lord’s good promises. All have to come pass”.

At one stage we were broadcasting over 20 times a week. The Lord has brought in gifts each month enough to cover all the costs. Broadcasting in eight languages meant that we were reaching people not only over the whole of India, but also people in Malaysia, Singapore, the Arabian Gulf states and East Africa.

We formed a Trust with a small committee of local believers including Mr. Gordon Ritchie and Mr. Justus Samuel . The committee has been continually changing over the years, but Christian businessmen in Bombay still sacrifice their time to gather monthly to discuss the work.

For the first year we had only one tape recorder, which meant that every three months, I had to travel several thousand miles by train to record 13 or 14 programs in Telugu, Tamil and Kanarese. When Miss Emma Horton of Clarence School, Bangalore was on furlough in U.S.A and Canada, workers together gave us three Pentron Recorders. We were able to put one in Narasapur to record Telugu programs and one in Madras for Tamil, and we were able to keep one in Bombay for dubbing from one machine to another.

For thirteen years we used one of the bedrooms in our flat as studio and office. We put soft-board on two walls, and put in double windows, but even so it was almost impossible to keep out the sound of crows, dogs, vegetable sellers and he grinding of curry powder in the neighbour’s flat. In the heat and humidity of Bombay, the room was extremely hot, until a friend in New Zealand sent the money to install an air conditioner. But it had to be turned of when we were actually doing live recordings. Around the walls were shelves of Emmaus Bible correspondence courses. The two clerks worked on during live recordings. As it was still used as a Guest-room as and when required, here was always a bed as well.

Br Harold McGregor laboured for the Lord for many years in India and New Zealand till he was called home.

Your ticket for the: About Us